When we take the time to mentor students, they become mentors themselves. 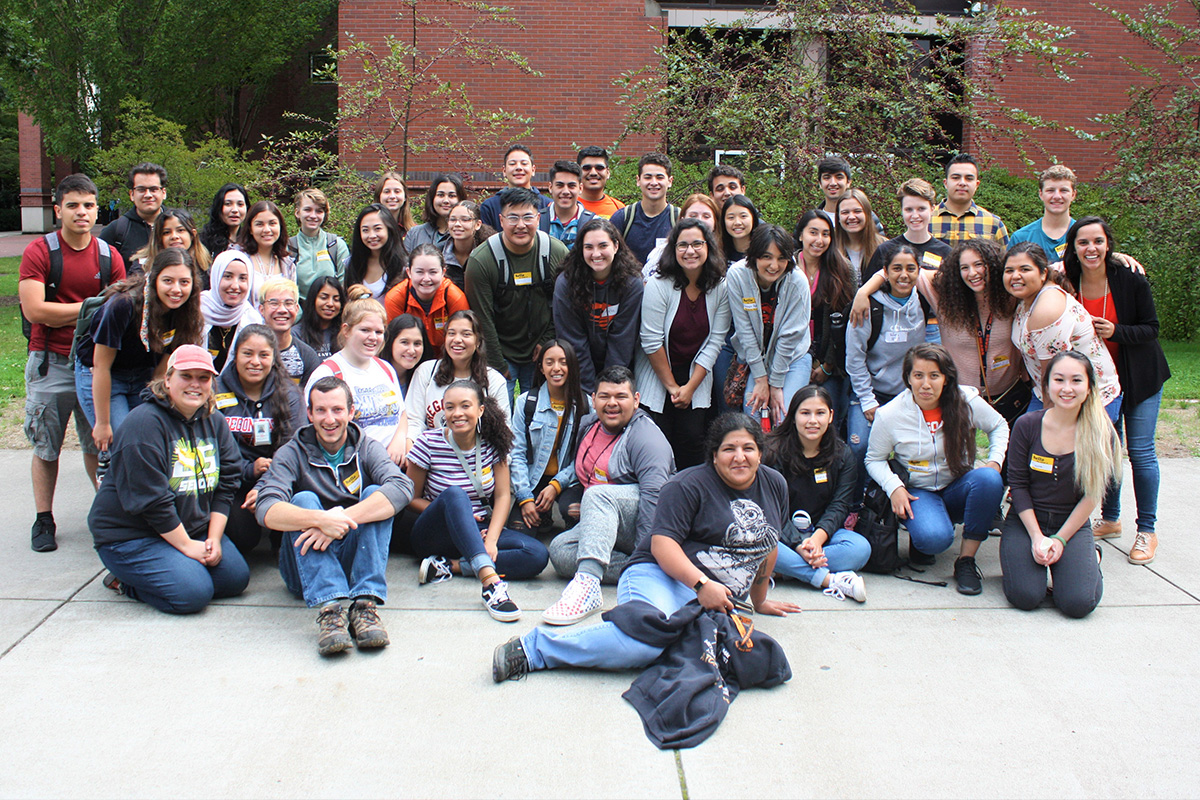 Yenifer Ramirez Gonzalez and Allan Aguirre-Burk are a great example of this. Because members of the Oregon State STEM Leaders program looked out for them, they found themselves surrounded by opportunities — including undergraduate research, internships, attending the Hispanic Association of Colleges and Universities conference and more.

The program, which was created to increase the diversity and success of undergraduates in STEM fields, places students in cohort-based workshops, with peer and faculty mentoring. Ramirez Gonzalez and Aguirre-Burk, both first-generation college students, say STEM Leaders was invaluable in helping them find a path to success.

Ramirez Gonzalez first became interested in electrical engineering after taking a robotics class in middle school. She had long dreamed of breaking into a traditionally maledominated field.

“I wanted to represent the fact that girls can do it, too,” she says.

While she is leaning toward a career in robotics or programming, Ramirez Gonzalez is also exploring the power side of electrical engineering, thanks to the connections OSU’s STEM Leaders has provided. This past summer, she interned with Eduardo Cotilla-Sanchez, associate professor of electrical engineering and computer science, to assist in developing emergency generators to sustain Oregon’s coastal communities in the event of a Cascadia subduction zone earthquake. Prior to that, she worked in the lab of Mario Magaña, associate professor of electrical and computer engineering, discovering new ways to harness power from wave energy, similar to the way solar and wind power are generated.

One of the biggest payoffs in all her hard work came when she was introduced to OSU’s Human-Computer Interaction — an applied degree option that combines computer programming with human psychology. Under guidance from Anita Sarma, associate professor of computer science, Ramirez Gonzalez and a group of other students conducted a study on how software developers create context around their programming tasks. Their work was published in a conference paper.

Aguirre-Burk has had a passion for the medical field for as long as he can remember. After exploring his options, he decided to pursue a career as a physician’s assistant, which would allow him to look into a variety of subspecialties, including cardiology and neurology. To get there, he’s working toward a dual degree in molecular biology and biochemistry.

Aguirre-Burk says he was impacted by the STEM Leaders program in more ways than one.

“For a lot of underrepresented students who come to college, I think it’s hard for us to feel like we deserve to be here,” he says. “The STEM Leaders program didn’t just tell us we did — they truly made us feel that way.”

Aguirre-Burk is making strides in his research, too. He recently worked in Oregon State’s skeletal biology lab with two professors in the College of Public Health and Human Sciences, Urszula Iwaniec and Russell Turner. Their study focused on the effects of an anti-rejection drug used for transplant patients on bone health, which also has anti-aging properties. Aguirre-Burk is a co-author on this research, which will soon be in review for publication.

Stephanie Ramos, STEM Leaders program coordinator in the Office of Undergraduate Education, served as the link between Ramirez Gonzalez, Aguirre-Burk and nearly all of the research opportunities and faculty connections that came their way.

She also connected them with the Hispanic Association of Colleges and Universities conference — and offered them a chance to tell their stories.

The three of them, along with Charlene Alexander, vice president and chief diversity officer at Oregon State, flew to Chicago to speak about the importance of programs like STEM Leaders for Latinx students.

The narratives provided by Ramirez Gonzalez and Aguirre-Burk — which emphasized student needs like building confidence, feeling supported and gaining experience outside the classroom — made a big impact. And in that moment, the students became the educators, teaching decision-makers how to guide students toward success.

Following the presentation, Ramirez Gonzalez was approached by multiple universities that encouraged her to apply for graduate school. She was also sought out by recruiters from the Department of Energy and several tech companies.

Ramirez Gonzalez and Aguirre-Burk credit their achievements thus far — and their inspiration to achieve more — to the STEM Leaders program and to Ramos, who has been at their side throughout the process.

“I’m so thankful that STEM Leaders has given me the chance to impact their lives,” Ramos says. “But I didn’t do it alone. The students have the support of their deans, their colleges, their provost. That’s why it works.”