We Have Work To Do

Home » We Have Work To Do

Got Work To Do Podcast 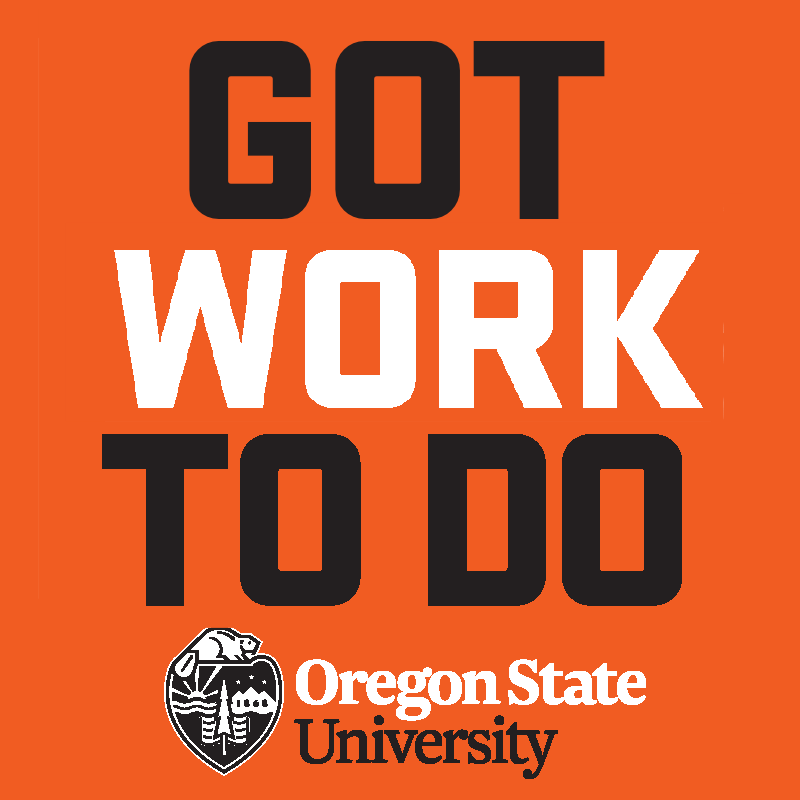 The Got Work To Do Podcast features members of the Oregon State University community whose work in diversity, equity, inclusion and social justice corresponds with the themes of the We Have Work to Do Campaign. The podcast is hosted by Brandi Douglas, Assistant Director of Outreach in the Office of Institutional Diversity.

In the season two finale episode, Dr. Jeff Kenney - Director, Institutional Education for Diversity, Equity and Inclusion and Scott Vignos - Assistant Vice President, Strategic Diversity Initiatives speak with Brandi Douglas, Assistant Director of Outreach and GWTDP Host, about her experience hosting the podcast. Brandi also reflects on her time at Oregon State University, which will come to a close in late July, and shares her thoughts about her favorite comic book superhero.

In this episode, Brandi speaks with Dr. Ed Feser, Provost and Executive Vice President, about the vulnerable work of recognizing, understanding, and combating racism in higher education.

In this episode, Brandi speaks with students Carla Medel, Sienna Kaske, Ana Alcantar, David Trinidad, and Maria Lachino-Sonato about student activism and organizing. These students are part of the student organization, Here To Stay and the Dreaming Beyond Borders Resource Center.

In this episode, Brandi speaks with Teresita Alvarez-Cortez, Director of Diversity Initiatives and Programs within University Housing and Dining Services and Anne Gillies, Director of Search Advocate Program about bias education and response efforts.

In this episode, Brandi speaks with Dr. Luhui Whitebear, Assistant Director of the Native American Longhouse Eena Haws, and Dr. Adam Schwartz, Associate Professor of Language, Culture and Society about the connection between race and language.

In this episode, Brandi speaks with Dr. Marisa Chappell, Associate Professor in the School of History, Philosophy and Religion, about life post-election. They specifically speak about the differences between current and past presidential elections, the current environment for the civil rights movement and hopes for the future. Brandi also recruits Marisa to be in her next Zoom theatre production.

In the Season Two Premiere, Brandi talks with Nicole Hindes, Assistant Director and Miguel Arellano, Basic Needs Navigator about their work in the Human Services Resource Center. They also speak about life during the pandemic.

Episode Nine: Off The Dome…

Brandi closes out the first season of the Got Work To Do podcast. In this episode, she shares her reflections of the podcast and her thoughts about the state of the nation today. This episode was recorded a week after the murder of George Floyd by a Minneapolis Police officer. Brandi takes a moment to vocalize the emotional and mental weight she carries as a Black woman and a Higher Education professional.

Brandi talks with Dr. Allison Davis-White Eyes, Director of Community Diversity Relations in the Office of Institutional Diversity and Dr. Larry Roper, Professor in the School of Language, Culture and Society about the trajectory of diversity, equity and inclusion at Oregon State University. This conversation is full of wisdom nuggets!

Brandi talks with Scott Emery, Director of IT Relations and Chrysanthemum Hayes, Associate Director, Institutional Analytics and Reporting, about the relationship between technology and social justice. They also talk about a few of their favorite things.

Brandi talks with Naomi Fitter, Assistant Professor of Robotics and Sarah Hagen, 6th year PhD student in Mathematics, about their journeys and experiences as women in STEM and in comedy. A fun conversation that also covers their love of music including the start of a jam band and the jubilation of a new comic joining the scene.

Brandi talks with Allyson Dean, is Communications, Research and Policy Manager in the Office of the Registrar and Whitney Archer, Associate Director in Diversity and Cultural Engagement and the Assistant Director of the Hattie Redmond Women and Gender Center, about the history and role of faculty & staff affinity groups at OSU. They also talk a bit about drag culture and their personal histories in drag performance.

Brandi speaks with Dr. Nana Osei-Kofi, Associate Professor in Women, Gender and Sexuality Studies and the Director of the Difference, Power and Discrimination Program at OSU and Dr. Kate MacTavish, Associate Professor in Human Development and Family Sciences and Director of Equity, Inclusion and Diversity Initiatives in the College of Public Health and Human Sciences, about creating inclusive and equitable learning environments. We also hear about their journeys into social justice stemming from their families and their favorite places in Corvallis.

Brandi talks to Natalia Fernández, Associate Professor, Curator, Archivist of the Oregon Multicultural Archives and Co-Founder of the Queer Archives at OSU and Raven Waldron, 2nd year Doctor of Pharmacy student, Co-Founder of RAD, campus leader and activist, about activism, coalition building, and the creation of a new scrap booking podcast.

Brandi talks with Scott Vignos, Assistant Vice President for Strategic Diversity Initiatives in the Office of Institutional Diversity...aka her supervisor...about the work of OID since its inception in February 2016, a bit about the work he does and to learn more about this man of mystery.

In this episode, we introduce the purpose, the host and the hopes of the podcast.

‹ Ways to Engage up Webinar Series ›