What is a bias incident?

Bias incidents can occur in a variety of settings, but have one important factor in common: they create a hostile working, learning or living environment and frequently have a negative psychological, emotional or physical effect on an individual or community.

Why is it important to respond to bias incidents?

Bias incidents create a hostile working, learning or living environment and frequently have a negative psychological, emotional, or physical effect on individuals and communities.

What can I do if I experience or witness a bias incident?

All Oregon State community members are encouraged to inform the Bias Response Team (BRT) of bias incidents by submitting a Bias Incident Report. Reports may be submitted anonymously, but the ability of the BRT to respond to anonymous reports is limited.

What does the Bias Response Team do when it receives information about a bias incident?

Oregon State has Reported Bias Incident Response Protocol to guide its response to bias incidents. When a report is submitted, the BRT carefully evaluates the report to identify needs and possible actions. The team seeks to prioritize a reporter's well-being, health, and safety and connects them to university resources that can offer more specialized support, while also facilitating appropriate educational interventions.

This process is represented in the chart below: 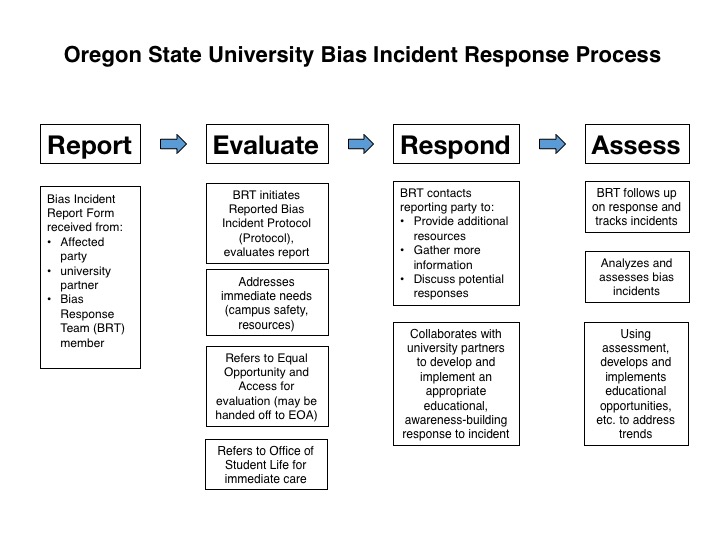 Should I submit a bias incident report, even if I don't know who is responsible?

What if I am involved in the in the BRT process?